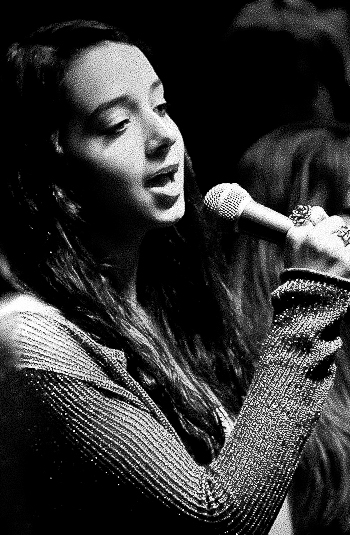 We took my oldest daughter to a Hollywood vocal coach who has helped famous performers, someone who takes pride in being a “change agent.” Singing wasn’t an area I knew much about. It was our girl’s first real singing lesson in her young life. I think we were as nervous as she was.

When we arrived, we heard gorgeous belting from another studio, and were convinced a very big star was behind that door. Ushered in, we saw a beautiful girl dressed all in white, preparing for the recording studio in a matter of days. Impressive (and no doubt intimidating to any newbie).

The girl was told to sing for us. She faced a mirrored wall. “No– people over HERE,” the coach chided. She faced us, warbling with a distracted look over our heads. “EYE CONTACT,” he corrected. She would try, we smiled back, but she couldn’t hold the gaze.

The coach asked her to sing the words to my daughter instead, and continue while holding her hand. The sound changed! It’s hard to ignore real connection.

“Why can’t you look?” he asked. “Guess I’m worrying if it’s good enough,” she responded. “It’s hard.” He nodded knowingly.

My daughter’s turn. She was asked to speak the words she had heard from the song, then elongate the sounds. As a dancer she knew about eye contact (and let’s face it, being my kid, it’s a given!), so she did as told. She soon sang to the pro singer, holding her hand as before.

“How’d you do?” the coach asked my child. “Umm, I wish I was better.” “What’s holding you back?” “Lack of self-confidence.” “What did you think of  the singer here? “Oh she’s awesome.”  Irony. The star in white looked awkward, uncomfortable, obviously believing otherwise.

Soon there were exercises and discussions about letting go (“I am free”),  not comparing yourself to anyone, not trying to “be a star” (rather “share your heart”). Good advice for us all, yes?

As each reluctant body began to give up the resistance– there were tears. And guess what else? MUSIC! All before the mechanics of notes had even begun to be studied.  Like magic: vulnerability, giving and yes, love, can be heard.

These qualities can be keys to freedom in more ways than emotionally. Actors know this, dancers, even psychiatrists know this. There is a congruence of results, movement, sound and reaction with thought. Simple cause and effect. It may surprise you. You have more potential than you think!

I won’t reveal any more glimpses into the genius of that coach’s methods, but suffice it to say that both girls were singing like larks by the end of the hour. Their emotions may have “embarrassed” them and given them a workout through struggle, but we, their audience, soon had wet faces too. It was a life lesson as much as a singing one. We parents felt gifted not just by the songs, but by the reminder of the direction. The coach’s own focus was outward and giving.

As an actor I never got a good critique until I stopped thinking (worrying) about myself. Confidence never came until I let go of the quest for perfection and accepted myself as a messy, flawed human being. Then I had to focus on the other person’s understanding and reception, connecting. Yup, my attention had to be on who I was with. Nothing was more important.

The vocal coach shared several success stories– one in particular about a well known star. She came to him as a successful actor only, without singing experience and with what amounted to a very problematic attitude. Bit of a diva. Changing her focus began immediately–and a few short years later, she’s on international tour as a real singer! Amazing. “From zero to hero” as they say with a simple shift of attention.

There are so many stories like this, and not all show biz ones. Going from “I’m great” (or want to be) to “you’re great” (and I’m here with you) can actually change the world, one person at a time. It’s not a cliché, it’s immediate power.

Where’s your focus? Is it on what you want or helping someone else receive? Is it on a prize or this “play” right now? You can do more with others, sincerely caring and interested in them, than alone anyway. Be the change you want to see. Fix your focus, and your heart (and the world’s) will sing!