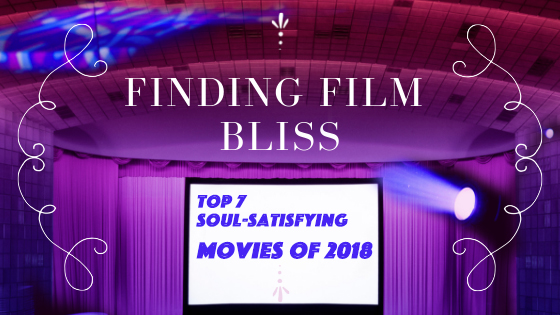 Snuggling in for a good flick at home, or making the effort to get to a theater should be a treat, not a gamble. Here are my thoughtful 2018 movie recommendations, now in wide release from the last award season.

I’m lucky that I get to preview movies for awards screenings, so I see more movies than the average Jill. Let that now be of benefit to you!

Although hard to narrow down, these quality films made me sigh at the end.

Without giving too much away…
Clicking on the titles and poster captions below will take you to official film sites for the trailers, if desired. There you will also find cast and award information. (Personally, I like to go in blind, letting each story mark me freshly.)

Each of these titles has hooks beyond the surface topic, that may help you scratch a particular itch.

On the Basis of Sex

On the Basis of Sex﻿ is a dramatization about Supreme Court Justice Ruth Bader Ginsberg, in her early days of becoming. (There’s also a documentary about her, RGB, but “Basis of Sex” is your best entry point.) The strange conventions of the rarified court make it compelling to peer into.

Folks expect to learn why she is a feminist icon. The surprise is that her sense of justice results in equality for all. In fact, the case focused on here is one defending a man, who was hurt by a law meant to protect women.

So that is your flag-waving rationale, but note the delicious fashion-consciousness of the tiny woman: from gloves and pearls to 70’s scarves and fancy judicial collars, RGB’s look is intentional and meant to empower.

Unlike the aggression of TV drama attorneys, her best quality is her knack for calm, matter-of-fact disagreement. It’s even friendly! Never seen anything quite like that. Her. Don’t we all wish we could be so self-controlled? Her tenacity in seeking fairness manages to keep others open, to hear her reason.

Another yummy highlight was Justice Ruth’s seemingly traditional marriage. Hubby did more than most, while she made amazing sacrifices for him early on. Theirs was an enduring love story.

Root for RGB, and for all of us along the way!

“Love & Bananas” is the documentary story of an elephant rescue in Thailand. I thought I knew enough about elephants, but was horrified by statistics as well as common practices. Reality check.

This is a chance to get to know a large wild animal in a close privileged way, to watch reactive behaviors… and relate.

Like us, elephants have not only feelings, but emotional scars that can be long term.

We can have that change too. Discover paths out of misery, whether the elephants’ or our own. Go for the hope!

Mary Poppins Returns is pure whimsy. I went in skeptical that childhood classics may be too Pollyanna for an adult to indulge in. Or that sequels disappoint. Or that this one wouldn’t entertain. Fiddlesticks.

Stay open, let go of your modern concerns, and you may find yourself grinning at the screen involuntarily. I sure did and I wasn’t alone. Even my hard-to-impress teen couldn’t help it.

It seemed the creators and performers went all out to delight us. “Poppins” is spectacle, song, and nostalgia. Go for the escape!

A Star is Born

A Star is Born is a remake about an established star singer discovering a new one, while their career trajectories intersect inversely. Cast with a real-life superstar didn’t hurt, nor a multiple-Oscar-nominated actor opposite her. That’s the window-dressing though. Beyond celebrity fandom…

The movie is a character study on vulnerability at all levels. Its honesty is astonishing, as it strips away makeup, lies, and fame to reveal battered hearts longing for more. Maybe you will see your own struggles for intimacy reflected.

The highest highs are broadcast in the film’s incredible sound, recorded live rather than separately taped. I didn’t know how it was done or why at the time, but it grabbed me by the gut. When the end credits rolled, the music continued, and the entire audience stayed put, transfixed, concentrating on each magical tone. It said it all.

Go for the rush of romance, the drama of stardom, and the soaring music that celebrates both!

Roma is about a Mexican housemaid whose life is emotionally woven into the family she works for. The black and white movie is visually poetic, richly detailed to authentically recreate the filmmaker’s past. Such specificity makes it universal: our lives are each filtered by tangible environments.

Without a backing musical track, Roma uses water sounds to reflect breath and heartbeat as the rhythm of life. Tides of change. Weeks later, this stayed in my mind, relaxing me.

I was antsy in the beginning, until I could let go of here and now. Be patient. Allow it to wash over you.

Events are observed the way children do it: accepting them, often without understanding. We see things, our life happens, and making meaning of it comes later.

Without a soundtrack to editorialize our feelings, watching as time unfolds…surprise, the movie felt like my own memories. How did it seep under my skin? Emotions react to anchor them.

The takeaway is that time spent tightens ties that bind. It is the ties that make people important.

See this one for the meditation on connection.

Green Book depicts racism in the 60s, both overt and as taken-for-granted normalcy. A buddy movie about an unlikely odd couple, it is a true story portrayed by charming actors who get the point. Changing society means changing ourselves first.

We absorb life lessons within relationships, and this one reminds us how it’s done. Like children, we learn our prejudices as passed down, but prefer to have someone to play with. We try harder when we are closer.

To be appreciated for one’s unique qualities is to be really seen. To be understood is heart-warming. Green Book will make you feel friendship is possible in unlikely places.

Also, presented among the sad facts of history told here, there is a LOT of laughter!

See this for the humor of truth “stranger-than-fiction.”

Capernaumrefers to a place of “chaos and miracles,” depicting a young boy’s daily fight as a mistreated refugee in Lebanon, who tries to care for others. But, this is not a typical story of tough living in distant lands. This is a plea for the powerless everywhere.

I pursued this movie after several colleagues called it the best movie of the year. Actress Glenn Close called it a masterpiece. In other words, this title is worth a chase! Although foreign films may be harder to find, the cream should rise to the top. Track down a chance to witness a world you likely haven’t seen in such detail.

The adult language, situations, and responsibilities of this lithe child were unnerving. The scale of his dense and dusty environment was a daunting reality for the adults in it. First, watch out of curiosity. How does a tiny force manage?

The story challenges our definition of what it means to be good. What rights children should have. And how to help the desperate. Your values should be clarified to you.

Next, the story itself is fascinating. Many times, I was incredulous over what was shown. It is a quest of instinct, care, and survival. The emotional impact is immense. Compassion is love, make no mistake, but it needs action to be complete. You will swear your heart is larger after seeing this tale. Capernaum is deeply moving!

In conclusion, I discovered that the boy’s plight was real (enough), and the post-premiere follow-up on the street children involved, a cause for celebration. You may recall being small, or feel thankful for the kindness of strangers throughout your own life.

We need each other. We need to see each other’s needs. This movie is what films are for: to educate, entertain and inspire. Bingo, screen it for all three.